Swami Vivekananda Chicago, USA, 11-27 September 1893 for the very first time, religious leaders from the East and the West met in Chicago to discuss the importance of religion in the world. They wished to learn about other people’s religions, and also explain their own. This gathering was known as the World’s Parliament of Religions.
Jan 29, 2010, 3:44 pm ISTIndiansSarita Pant 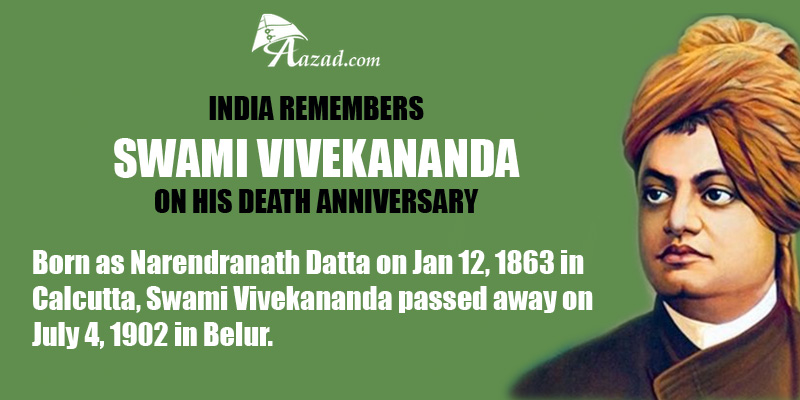 Vivekananda
Chicago, USA, 11-27 September 1893 for the very first time, religious leaders from the East and the West met in Chicago to discuss the importance of religion in the world. They wished to learn about other people’s religions, and also explain their own. This gathering was known as the World’s Parliament of Religions.

The opening of the conference was announced by ten strokes of the liberty Bell. Each stroke of the bell stood for one of the ten major religions of the world. All of these religions were represented by various leaders at the Parliament in Chicago.

Swami Vivekananda
“Arise! Awake! And Stop Not till the Goal is Reached”

Vivekananda’s real name was Narendranath Dutt. He was born in 1863 into an aristocratic family of Calcutta. He had been interested in spirituality and religion from childhood. When he was eighteen, he met Ramakrishna Paramahamsa. That meeting changed his life. He began to visit Ramakrishna frequently. In 1885, at the age of twenty- two , he changed his name to Vivekananda. Ramakrishna died in 1886, leaving Vivekananda in charge of the order of monks he had founded.

When Vivekananda was asked to represent Hinduism at the World’s Parliament of Religions, he was a young man of thirty and unknown in the West. But his speeches at the Parliament changed that. He spoke about the equality of all religions, and called for religious tolerance and understanding. In one speech, he related the story of the frog in the well who thought his well was the whole world. We are like the frog in the well, explained Vivekananda. We know only our own religion and think that it is the best in the world. Our ignorance makes us abuse people who do not belong to the same faith as ours.

Almost 120 years after the Parliament of Religions was held, Vivekananda’s message of religious tolerance is still an important one for the world.

Belur Math and the Ramakrishna Temple.In 1897, Vivekananda founded the Ramakrishna Mission, an organisation committed to social work. He set up three monasteries as well. The best known of these is Belur Math, near Calcutta. He died five years later.

At Belur there also stands the Ramakrishna temple. Its design is based on Vivekananda’s idea of religious harmony. If you walk around the temple, You will be able to see the use of Islamic, Christian, Jain, Buddhist and Hindu styles of architecture, from places of worship all over India and the world. The temple symbolizes the equality of all faiths, So that all who come to visit feel at home.

Vivekananda’s real name was Narendranath Dutt. He was born in 1863 into an aristocratic family of Calcutta.

Poems written by Vivekananda’s
1) A Benediction :-
The mother's heart, The hero's will,
The sweetness of the southern breeze,
The sacred charm and strength that dwell
On Aryan altars, flaming, free;
All these be yours, and many more
No ancient soul could dream before--
Be thou to India's future son
The mistress, servant, friend in one.

Behold, it comes in might,
The power that is not power,
The light that is in darkness,
The shade in dazzling light.

It is sweet rest in music;
And pause in sacred art;
The silence between speaking;
Between two fits of passion--
lt is the calm of heart.

It is beauty never seen,
And love that stands alone,
It is song that lives un-sung,
And knowledge never known.

It is death between two lives,
And lull between two storms,
The void whence rose creation,
And that where it returns.

To it the tear-drop goes,
To spread the smiling form
It is the Goal of Life,
And Peace--its only home!

He who is in you and outside you,
Who works through all hands,
Who walks on all feet,
Whose body are all ye,
Him worship, and break all other idols!

He who is at once the high and low,
The sinner and the saint,
Both God and worm,
Him worship—visible, knowable, real, omnipresent,
Break all other idols!

In whom is neither past life,
Nor future birth nor death,
In whom we always have been
And always shall be one,
Him worship. Break all other idols!

Ye fools! who neglect the living God,
And His infinite reflections with which the world is full.
While ye run after imaginary shadows,
That lead alone to fights and quarrels,
Him worship, the only visible!
Break all other idols!

Perchance a prophet thou—
Who knows? Who dares touch
The depths where Mother hides
Her silent failless bolts!

Perchance the child had glimpse
Of shades, behind the scenes,
With eager eyes and strained,
Quivering forms--ready
To jump in front and be
Events, resistless, strong.
Who knows but Mother, how,
And where, and when, they come?

Perchance the shining sage
Saw more than he could tell;
Who knows, what soul, and when,
The Mother makes Her throne?

What law would freedom bind?
What merit guide Her will,
Whose freak is greatest order,
Whose will resistless law?

To child may glories ope
Which father never dreamt;
May thousandfold in daughter
Her powers Mother store.