SPACE SHUTTLE COLUMBIA BREAKS UP IN THE SKIES

SPACE SHUTTLE COLUMBIA BREAKS UP IN THE SKIES
May 13, 2010, 11:13 am ISTScienceAazad Staff 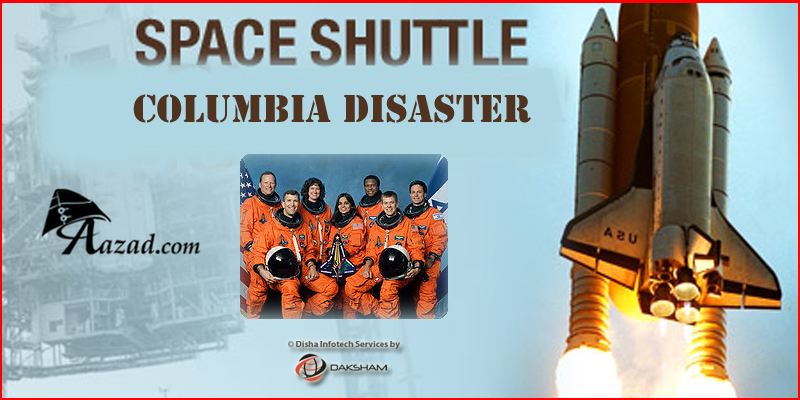 SPACE SHUTTLE COLUMBIA BREAKS UP IN THE SKIES
1 February 2003 ,Texas, USA: The US Space shuttle Columbia broke up soon after re-entering the Earth's atmosphere. All seven of the Crew were killed.

This was the twenty- eighth flight for Columbia, Which first flew in 1981 and was the oldest shuttle in the US Space Agency NASA’s space shuttle programme.  In forty- two years of manned space flight, this was the first time that NASA lost a space crew during landing. The disaster occurred seventeen years after the shuttle, Challenger, exploded shortly after lift-off, killing all seven of its crew.

What happened? When? Why?
Columbia was returning from a sixteen-day mission, orbiting the Earth .It was due to land at the Kennedy Space Centre in Florida at 9:16 a.m. that morning. At 8:15, the shuttle began to re-enter Earth's atmosphere. It started heating up, and soon all contact with it was lost. A few moments later, witnesses in Texas heard "big bangs" and saw several vapor trails across the sky. The space Shuttle had broken up.

The accident was caused by a piece of insulating foam, which had become detached during take -off and had struck the shuttle's heat shielding.When the shuttle re-entered the Earth's atmosphere for landing, the heat generated melted the wing. This made the shuttle break up.

The Magnificent Seven Rick Husband, the shuttle's commander had been working with a team designing spacecraft. Kalpana Chawla, an Indian-born American and one of the two women on board, was an aerospace engineer.Michael Anderson had the job of checking that all the experiments were going well. William McCool, the pilot of the shuttle, was a former test pilot. David Brown, who had once been a circus acrobat, and Laurel Clark were doctors. IIan Ramon, an Israeli air force colonel, was the only non-American in the crew.

They were all deeply committed to space exploration. In the words of Kalpana Chawla, "When you are in space and look at the starts and the galaxy, you feel that you are not just from any particular piece of land, but from the solar system."

What is Space Shuttle?
A space shuttle takes astronauts and cargo to space and back. It takes off like a rocket, and goes into orbit. While in orbit it fires its engines when it wants to slow down and stop orbiting. After it re-enters Earth's atmosphere, it glides in for a landing on a runway. The space shuttle does many kinds of jobs. It launches satellites and functions as an orbiting science laboratory. Its crew might repair other spacecraft and work on the International Space Station.