Nathuram Godse, A misunderstood patriot of India. Calling him a hero of any sort would be under-valuing or may be over-valuing for a few. But, conferring a stature of a great patriot to him that, no-one will deny. Not at-least after reading the rest of the article. Yes he had his own perspective of what was good for the nation and did not deny of others contributions to it.
Oct 31, 2011, 6:30 pm ISTIndiansSarita Pant 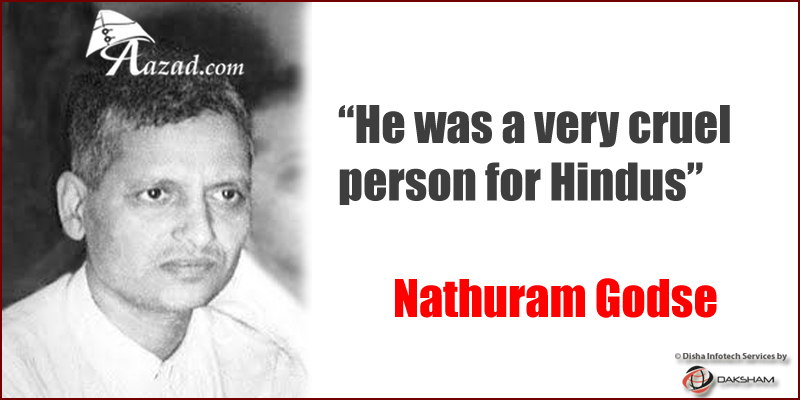 Nathuram Godse, A misunderstood patriot of India. Calling him a hero of any sort would be under-valuing or  may be over-valuing for a few. But, conferring a stature of a great patriot to him that, no-one will deny. Not at-least after reading the rest of the article. Yes he had his own perspective of what was good for the nation and did not deny of others contributions to it. Calling him and Hindu-Fanatic would be a mis-judgemental and you should hear the whole story before doing so; some of it in Nathuram Godse's own words. Yes, Government of India had suppressed information about him. His court statements, letters etc. were all banned from the public until recently.
Judged by his writings one thing becomes very clear; He was no fanatic.His court statements are very well read out and indicate a calm and collected mental disposition.

He never even once speaks ill about Gandhi as a person, but only attacks Gandhi's policies which caused ruin and untold misery to Hindus. Another interesting point to note is that Godse had been working with the Hindu refugees fleeing from Pakistan. He had seen the horrible atrocities committed on them. Many women had their hands cut off, nose cut off, even little girls had been raped mercilessly. Despite this Godse did not harm even single Muslim in India which he could easily have. So it would be a grave mistake to call him a Hindu fanatic.

Let us start by studying the motive behind Godse's act. By seeing the nature of the assassination in public space and Godse's act of turning himself over to the Police, we can see that Godse did not do this for personal reasons. He very well knew that he would be hanged and his name would be disgraced as Gandhi was considered a saint. And again Godse could have ran away and escaped punishment. But he did the reverse. He called a police officer and courted arrest. Before we proceed it would be wise to understand the backdrop of the assassination.

The central government had taken a decision; Pakistan will not be given Rs 55 crores. On January 13 Gandhi started a fast unto death that Pakistan must be given the money. On January 13, the central government changed its earlier decision and announced that Pakistan would be given the amount. On January 13, Nathuram decided to assassinate Gandhi.
Nathuram Godse was a learned man, very sharp and intelligent – editor of "Agrani" (one of the most famous newspaper of that time – with Nana Aapte). In his last editorial of "Agrani" which he changed overnight – he said "Gandhi must be stopped – at any cost" and he justified why Gandhiji's assassination was not only inevitable but also a delayed action, sth tht shud've happened LONG AGO.

In Nathuram's words - " I don't refute Gandhi's theory of non-violence. He may be a saint but he is not a politician. His theory of non-violence denies self-defence and self-interest. The non-violence that defines the fight for survival as violence is a theory not of non-violence but of self-destruction.The division of the nation was an unnecessary decision. What was the percentage of the Muslim population as compared to the population of the nation? There was no need for a separate nation. Had it been a just demand, Maulana Azad would not have stayed back in India. But because Jinnah insisted and because Gandhi took his side, India was divided, in spite of opposition from the nation, the Cabinet. An individual is never greater than a nation.

In a democracy you cannot put forward your demands at knife-point. Jinnah did it and Gandhi stabbed the nation with the same knife. He dissected the land and gave a piece to Pakistan. We did picket that time but in vain. The Father of our Nation went to perform his paternal duties for Pakistan! Gandhi blackmailed the cabinet with his fast unto death. His body, his threats to die are causing the destruction — geographical as well as economical — of the nation. Today, Muslims have taken a part of the nation, tomorrow Sikhs may ask for Punjab. The religions are again dividend into castes, they will demand sub-divisions of the divisions. What remains of the concept of one nation, national integration? Why did we fight the British in unison for independence? Why not separately? Bhagat Singh did not ask only for an independent Punjab or Subhash Chandra Bose for an independent Bengal?

I am going to assassinate him in the open, before the public, because I am going to do it as my duty. If I do it surreptitiously, it becomes a crime in my own eyes. I will not try to escape, I will surrender and naturally I will be hanged. One assassination, one hanging. I don't want two executions for one assassination and I don't want your involvement, participation or company. (This was for Nana-Apte and Veer Savarkar as they were against ghandhi's policies too, Godse wanted to assassinate gandhi all by himself and took promise from Nana Apte that he will continue helping Veer Savarkar in rebuilding India as a strong free nation.)

On January 30, I reached Birla Bhavan at 12 pm. Gandhi was sitting outside on a cot enjoying the sunshine. Vallabhbhai Patel's granddaughter was sitting at his feet. I had the revolver with me. I could have assassinated him easily then, but I was convinced that his assassination was to be a punishment and a sentence against him, and I would execute him. I wanted witnesses for the execution but there were none. I did not want to escape after the execution as there was not an iota of guilt in my mind. I wanted to surrender, but surrender to whom? There was a good crowd to collect for the evening prayers. I decided on the evening of January 30 as the date for Gandhi's execution.

Gandhi climbed the steps and came forward. He had kept his hands on the shoulders of the two girls. I wanted just three seconds more. I moved two steps forward and faced Gandhi. Now I wanted to take out the revolver and salute him for whatever sacrifice and service he had made for the nation. One of the two girls was dangerously close to Gandhi and I was afraid that she might be injured in the course of firing. As a precautionary measure I went one more step ahead, bowed before him and gently pushed the girl away from the firing line. The next moment I fired at Gandhi. Gandhi was very weak, there was a feeble sound like 'aah' (There are proof that Gandhi did NOT say "Hey Ram" at that time;  it's just made up stuff ) from him and he fell down.

After the firing I raised my hand holding the revolver and shouted, 'Police, police'. For 30 seconds nobody came forward and I scanned the crowd. I saw a police officer. I signalled to him to come forward and arrest me. He came and caught my wrist, then a second man came and touched the revolver… I let it go…"

Violence, Non-Violence I don't really understand. Are we saying we got Independence without violence? Then what was that what happened to the refugees (from both sides) during the partition (partition for the sake of whom and for whom). And what is that, that we still face when we get our young soldiers back in coffins. And we have political scams involved in these coffins too. We have paid very dearly and still are and with blood (violence vice-verse).