The Champaran Satyagraha of 1917 was Mahatma Gandhi’s first Satyagraha to end the exploitation of Indigo cultivators by British.
Dec 9, 2016, 4:27 pm ISTIndiansAazad Staff 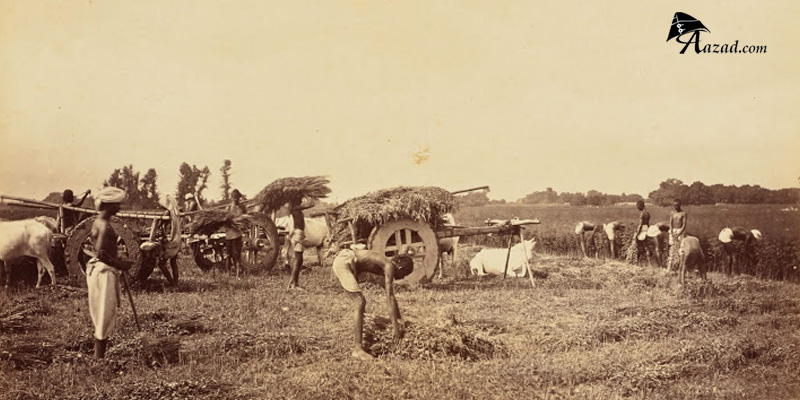 In the Champaran district of Bihar, the cultivators were forced by the British rulers to grow indigo and curtailed their freedom of cultivation. They could not grow the food they needed, nor did they receive adequate payment for the indigo.

Mahatma Gandhi was unaware of this exploitation in Bihar. It is said that an agriculturist named Rajkumar Shukla, met Gandhiji and briefed him about this situation and requested Gandhiji to visit the place to see for himself the state of Champaran farmers.  When Gandhiji was in Calcutta, Rajkumar Shukla followed him there and convinced him to visit Bihar. Gandhiji went to Champaran with Rajkumar early in 1917. On his arrival the District Magistrate served him with a notice stating that he was not supposed to remain in the district of Champaran but must leave the place by the first available train. Gandhiji was defiant of this order and didn't obey it. He was summoned to appear before the court.

Magistrate: "If you leave the district now and promise not to return, the case against you will be withdrawn."

Gandhiji replied: "This cannot be, I came here to render humanitarian and national service. I shall make Champaran my home and work for the suffering people."

A large crowd of peasants was outside the court shouting slogans. The magistrate and the police looked nervous. Then Gandhi said, ‘I shall help you to calm these people if I can speak to them.’

Gandhi appeared before the crowd and said, ‘You must show your faith in me and in my work by remaining quiet. The magistrate had the right to arrest me, because I disobeyed his order. If I am sent to jail, you must accept that as just. We must work peacefully. And violent act will harm out cause.’

The crowd dispersed peacefully. The police stared at Gandhi in admiration as he went inside the court.

The Government withdrew the case against Gandhi and allowed him to remain in the district. Gandhi stayed there to study the grievances of the peasants.

Gandhiji visited several villages and interacted with the cultivators to understand their problems. He came to a conclusion that the ignorance of the cultivators was one of the main reasons why it was possible for the European planters to repress them.

Gandhi therefore set up voluntary organizations to improve the economic and educational conditions of the people. They opened schools and also taught the people how to improve sanitation. The government realized Gandhi’s strength and his devotion to causes. They invited Gandhi to serve on that committee, and he agreed. The result was that within a few months the Champaran Agrarian Bill was passed. It gave great relief to the cultivators and land tenants.