A Salute to Kargil War Heroes

A Salute to Kargil War Heroes 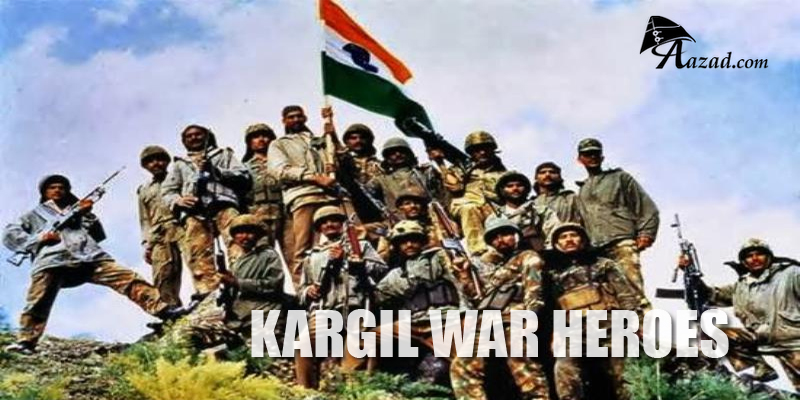 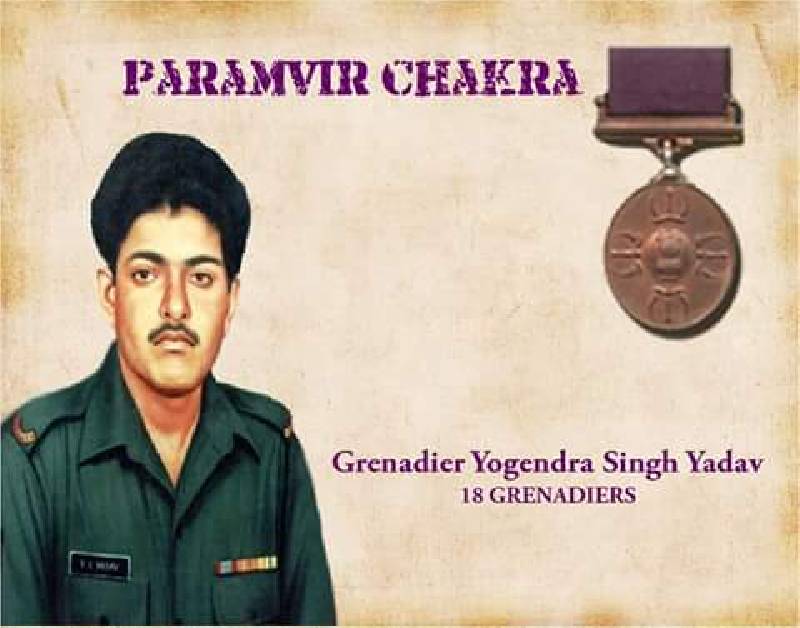 3/4 July 1999. Grenadier Yogendra Singh Yadav was part of the leading team of Ghatak Platoon which was tasked to capture Tiger Hill. The approach to the top was steep, snow bound and rocky. Unmindful of the risk involved, he volunteered to fix the rope for his team to facilitate the climb to the Top of Tiger Hill. On seeing the climb of the  team, the enemy opened intense automatic grenade, rocket and artillery fire killing the commander and two of his colleagues and the assault of the platoon was stalled. Grenadier Yadav crawled up to the enemy position to silence it and in the process sustained multiple injuries. Unmindful of his injuries he continued lobbing grenades and kept firing from his weapon which resulted in killing four enemy soldier and silenced the automatic fire. Inspired by his gallant act, the platoon charged on to the other positions  and ultimately captured Tiger Hill Top. Grenadier Yogendra Singh Yadav displayed the most conspicuous courage, indomitable gallantry, grit and determination under extreme adverse circumstances and was awarded Param Vir Chakra. 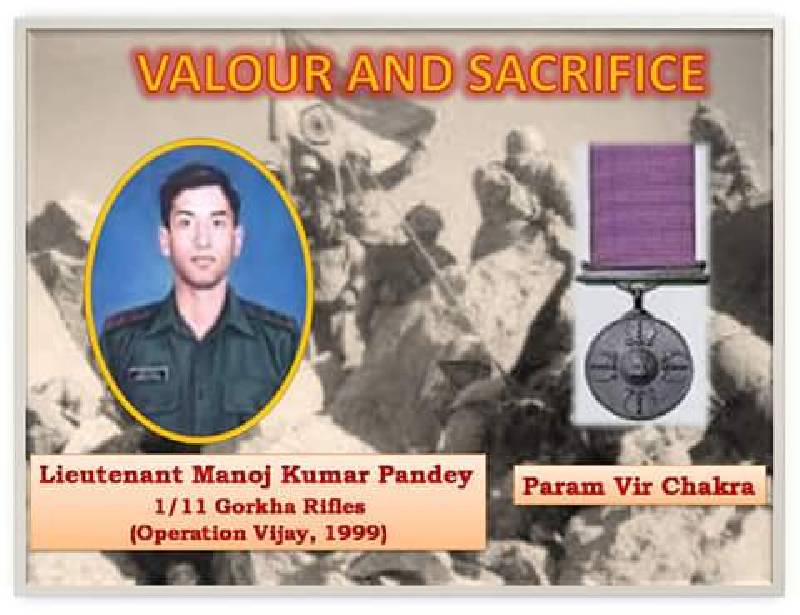 3 July 1999. Lieutenant Manoj Kumar Pandey was the Platoon Commander who was tasked to clear one of the enemy interfering position which was hindering the move of the company advancing column to reach the top of the Khalubar ridge. As his platoon approached its final objective, it came under intense enemy fire from the surrounding heights. Lieutenant Pandey quickly moved his platoon to an advantageous position under intense enemy fire. Fearlessly assaulting the first enemy position, he killed two enemy personnel and then destroyed the second position by killing two more. He was injured on the shoulder and legs while clearing the third position. Undaunted and without caring for his grievous injuries, he continued to lead the assault on the fourth position and destroyed the same with a grenade, even as he got a fatal MMG burst on his forehead. The singular daredevil act of Lieutenant Pandey provided the critical firm base for the company, which finally led to capture of the Khalubar. The officer, however, succumbed to the injury and for this valiant act he was awarded Param Vir Chakra, Posthumously. 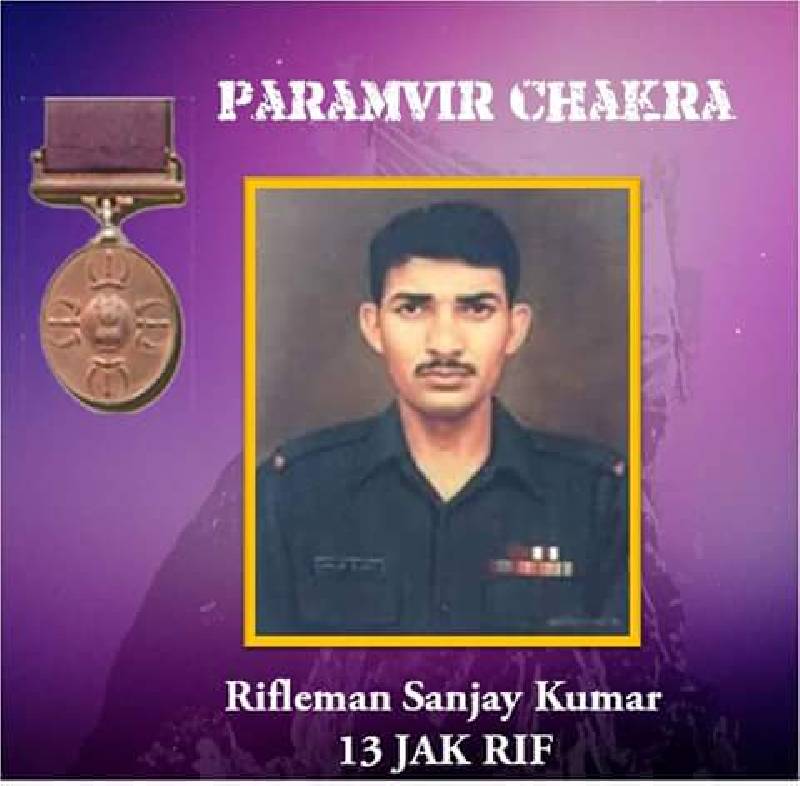 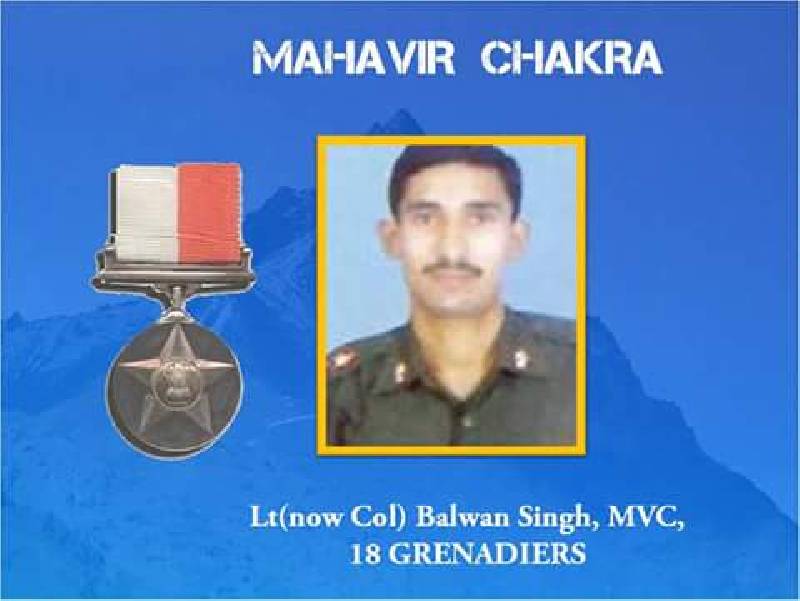 Lieutenant Balwan Singh as a Ghatak Platoon Commander was tasked to assault the 'Tiger Hill Top as part of a multi pronged attack located at16,500 feet which was snowbound and interspersed with crevasses and sheer falls. The officer, set about his task with single-minded determination and led the team for over twelve hours along a very difficult and precarious route and under intense artillery shelling to reach the designated spur. The  team used cliff assault  to reach the top with stealth and took the enemy by complete surprise. The enemy panicked and in a desperate fire fight attempted to repulse the Ghataks. In the ensuing firefight, Lieutenant Balwan Singh was himself seriously injured. He moved swiftly to encircle the enemy and engaged them in close combat and single handedly killed four enemy soldiers. The daredevil act, inspirational leadership, conspicuous courage and bravery were instrumental in the capture of Tiger Hill. For this courageous act Lt Balwan Singh was awarded Mahavir Chakra.

Read about India's Decisive Victory Against Pakistan at Kargil in 1999