If you are also baffled by Donald Trump's recent Tweet and want to know the meaning of Covfefe in Hindi, English or any other language, then you are on the right page.
May 31, 2017, 2:56 pm ISTShould KnowAazad Staff 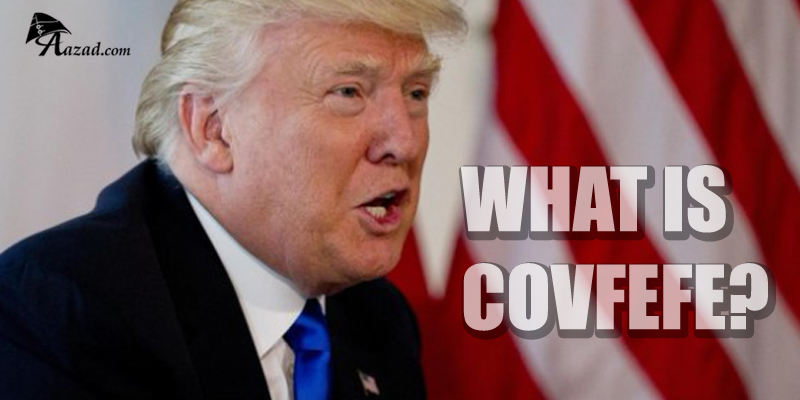 A few hours back, the President of USA Tweeted, "Despite the constant negative press covfefe". His tweet left everyone baffled as no one had ever come across the world Covfefe before. So does it mean anything? No, it doesn't really have any meaning. So why would the most powerful person on earth write something so gibberish? Well, the answer to this is simple, he must have been either too sleepy or under the influence of alcohol and didn't have any control over his naughty fingers. He may have intended to type "Negative Press Coverage", but was too lazy to check and rectify his error. Embarrassed by people mocking him for his typo, Donald just deleted his Tweet and posted,

Who can figure out the true meaning of "covfefe" ??? Enjoy!

Twitterati are having a ball over this typo of Mr. Trump. Kristina Wong tried to translate it on google and google was bang on in its Russian translation. Covfefe means "I resign".

This is #covfefe translated from Russian. pic.twitter.com/1Im7ZzLO0Y

Obama seems equally perplexed as the rest of the world.

This is #covfefe translated from Russian. pic.twitter.com/1Im7ZzLO0Y

All India Bakchod took a dig on Trump's Tweet in their own creative style of insulting and it is hilarious:

Check out this cool animated Tweet explaining us the meaning of Covfefe:

"And just before you serve it, you hit it with a dash of #Covfefe" pic.twitter.com/fm9CAF4Iyz

Will it be detrimental to Trump's popularity if he deletes the Covfefe this late? pic.twitter.com/VKrBGcxsKi

A new Pokemon has been announced too. Check it out:

Well, that's ruined that surprise! Guess we'll be back later in the week with a new name #covfefe pic.twitter.com/gfdJUgKHKu

Even the Queen is disturbed.

Even Queen is Disturbed ! #Covfefe pic.twitter.com/tgGTb2KC0R