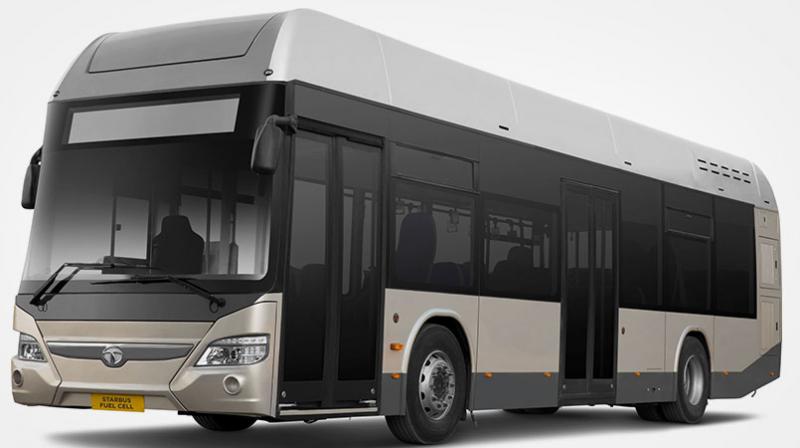 Hydrogen Fuel Cell Bus Made By Tata in partnership with ISRO

India has finally got its first Hydrogen Fuel Cell Bus as Tata Motors launched the future of mass public transportation at its Pune facility. The Hydrogen Powered Starbus Fuel Cell bus is a zero-emission mass transport solution, for inter-city commute and has been developed in partnership with ISRO (Indian Space Research Organisation). Combining hydrogen gas and oxygen, the fuel cell produces electricity to power the electric motor, with water and heat as a byproduct. The technology is said to be environmentally safe with 'zero-emission'.

Tata Motors launched the Starbus Electric 9m, Starbus Electric 12m and the Starbus Hybrid 12m range of buses which are designed, developed, powered by alternate fuels and made in India. The company says will be a good for smart cities. The company also showcased the country's first Fuel Cell bus (12m), LNG Powered bus (12m), and an 18m Articulated bus.

Company officials said the Hydrogen Fuel Cell Bus is about 50% more efficient than the conventional fuel-run vehicles, does not require external charging and has a driving range of up to 200 km. The fuel cell bus has been built on low entry platform with a ramp facility, pneumatic door operations among features.