A child born in Bihar with deformed features termed alien, supernatural and incarnation of Hanuman by locals. Read more
Mar 23, 2017, 9:19 am ISTScienceAazad Staff 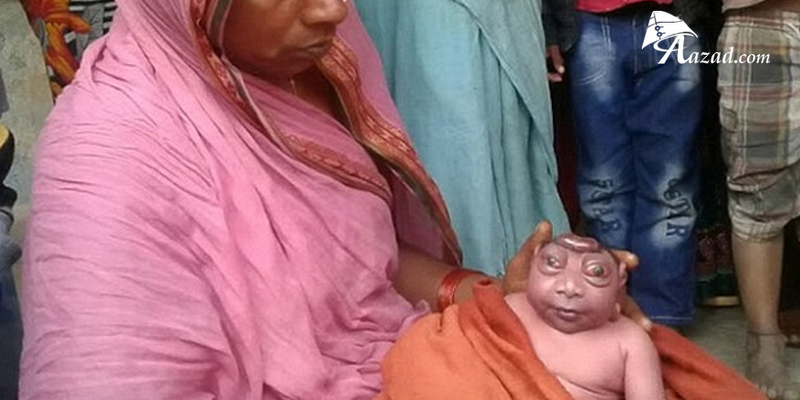 Indians are known to be insensitive towards people with different skin color, skin type, deformity or physically challenged. A newborn born with a rare condition (Harlequin Ichthyosis) in Katihar city of Bihar was termed alien and his mother refused to breastfeed him. His 35-year-old mother Khalida Begum was shocked when she saw that her baby did not look like other kids. The child also has symptoms of Anencephaly, where the child is born without a head. The shocked mother initially refused to even nurse the child, but started nursing it after a while. According to the Centres for Disease Control and Prevention, Anencephaly results in babies to be born without top parts of their brain and skull, mostly the forebrain and cerebrum. In certain cases, remaining parts of the body are also not covered by bone or skin.

According to Daily Mail UK, three in every 10,000 are affected children are affected by anencephaly, while annually five UK children are born with Harlequin Ichthyosis. The mother initially did not want to see the child and told the midwife to take him away from her sight. “Several body parts of the baby is not completely developed.

But now neighborhood families are flocking the house to catch a glimpse of the child which they believed to be the incarnation of monkey God. In the same village, a 21-year-old man was considered a deity after a condition left him 23 inches tall. This is not the first time newborns were considered supernatural forces by people. There have been instances when people pray to these children with rare conditions believing them to forces of God. (Image Source: Daily Mail UK)