Astronomers have discovered seven Earth-size planets orbiting a nearby star about 40 light-years away; and these new worlds could hold life.
Feb 23, 2017, 9:11 am ISTScienceAazad Staff 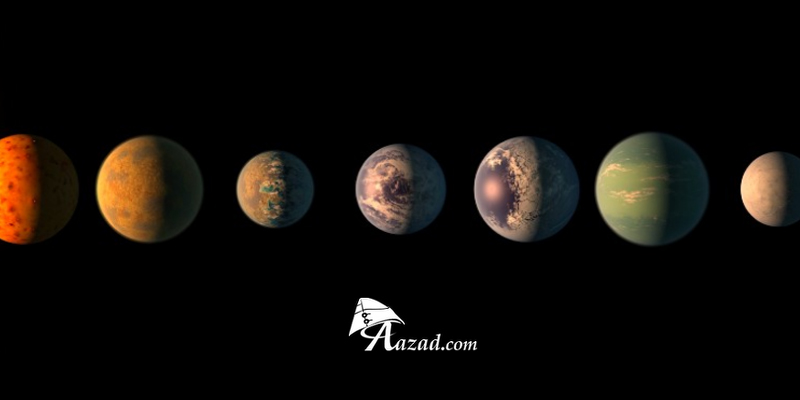 For the first time, astronomers have discovered seven Earth-size planets orbiting a single nearby star about 40 light-years away; and these new worlds could hold life. Six planets appear to have conditions that could allow for water on their surfaces - a prerequisite for life.

This cluster of planets is less than 40 light-years away in the constellation Aquarius, according to NASA and the Belgian-led research team who announced the discovery Wednesday.

Although 40 light-years away doesn't sound too far, it would take us millions of years to reach this star system. But from a research perspective, it's a close opportunity and the best target to search for life beyond our solar system.

This discovery outside of our solar system is rare because the planets have the winning combination of being similar in size to Earth and being all temperate, meaning they could have water on their surfaces and potentially support life.

"This is the first time that so many planets of this kind are found around the same star," said Michaël Gillon, lead study author and astronomer at the University of Liège in Belgium.

Starting closest to the star and moving out, the planets have respective orbits from one and a half to nearly 13 Earth days. The orbit of the farthest planet is still unknown.

Standing on the surface of one of the planets, you would receive 200 times less light than you get from the sun, but you would still receive just as much energy to keep you warm since the star is so close. It would also afford some picturesque views, as the other planets would appear in the sky as big as the moon (or even twice as big).

Based on preliminary climate modeling, the researchers believe that the three planets closest to the star may be too warm to support liquid water, while the outermost planet, TRAPPIST-1h, is probably too distant and cold to support water on the surface. But further observation is needed to know for sure.