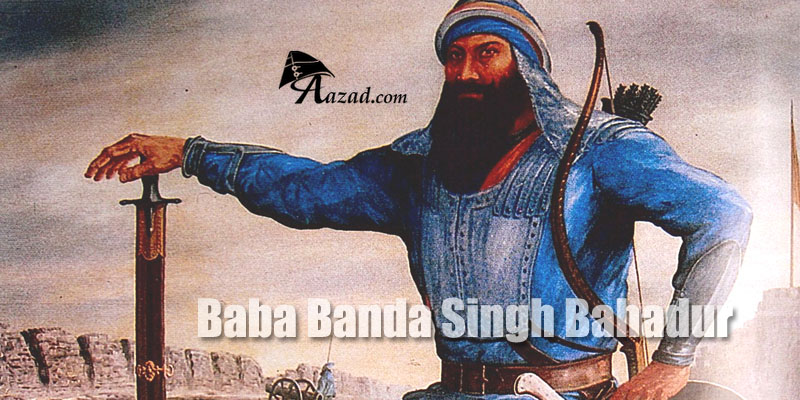 Born as Lachhman Das, he was extremely fond of hunting since early age. Once he went for a hunt and inadvertently killed a pregnant deer who gave birth to two babies before breathing her last. This incident had a great impact on Lachhman Das and changed his life. He shunned hunting along with other worldly pleasures to become a Bairagi Sadhu.

He became a disciple of many but none could provide him what he needed. He later got inclined towards Tantrik Sadhus and acquired some miracle healing powers and became quite popular. Though not many benefited from his miracles, he used them to humiliate religious saints and leaders who visited his ashram.

Guru Gobind Singh taught Lachhman Das the basic principles of Sikhsim and baptised him. Lachhman was given the name 'Banda Singh'. He then transformed from a bairagi Sadhu to a humble & brave Sikh of Guru.

Guru Gobind Singh later sent Banda Singh on a mission to Punjab to punish the oppressive rulers of that time and to assist him on this mission, Banda Singh was provided with weapons and 5 brave Sikhs as advisers. Hundreds of Sikhs later joined Banda Singh in his fight against the oppressive Mughal Forces. In a short span of time, Banda Singh managed to put an end to the life of many oppressive and tyrant Mughal rulers, Nawab Wazir Khan being the main tyrant who was also responsible for the death of Guru Gobin Singh's younger sons.  Under the able leadership of Banda Singh, Sikh Rule was established in large parts of Punjab. Even coins were minted under the Sikh Rule in the name of Guru Nanak Dev and Guru Gobind Singh.

At one end the Sikhs ruled in large parts of Punjab and on the other end, Faruksiyar became the Mughal emperor of Delhi. Furious over the defeat of Mughals at the hands of Banda Singh, Faruksiyar sent a large military force from Delhi to defeat and capture Banda Singh. The Sikhs were surrounded by a large number of Mughal forces in the fortress of Gurdas Nagal. The Sikhs fought bravely under Banda Singh's command but due to exhaustion of ration, they became too weak to continue the fight against the Mughal forces. The Mughals arrested the brave general Banda Singh Bahadur along with 700 Sikh soldiers and took them to Delhi and were incarcerated inside the Delhi fortress and left to survive on leaves of trees. Not only that, the captives were also paraded and insulted in Delhi Bazaars. The Sikhs were offered amnesty by Mughals if they accepted Islam but none of them betrayed Sikhism to embrace Islam and due to that they were tortured and killed publicly.

Death of Banda Singh: Banda Singh was the victim of one of the most cruel executions in the history of mankind. One June 9, 1716, his 4 year old son Ajai Singh was brutally killed in front him. Ajay Singh's liver was then forced into Banda Singh's mouth. Banda Singh was then put to death mercilessly by pincing the flesh from his body, bit by bit, with means of hot pincers. The cruelty of the Mughals didn't end there, they even pulled out Banda Singh's eyes and then chopped off his feet.

With the Martyrdom of Banda Singh, the Khalsa leadership was taken up by new warriors and within 90 years, Maharaja Ranjit Singh had established the Sikh Kingdom in Punjab.

Watch this full animated movie based on the life of Baba Banda Singh Bahadur Ji. The movie is in Punjabi with English subtitles: