Read about the second Sultan of the Delhi Sultanate Alauddin Khilji, his Eunuch army chief Malik Kafur, Khilji's obsession with Rani Padmawati and her self immolation.
Aug 19, 2016, 10:17 am ISTLeadersAazad Staff 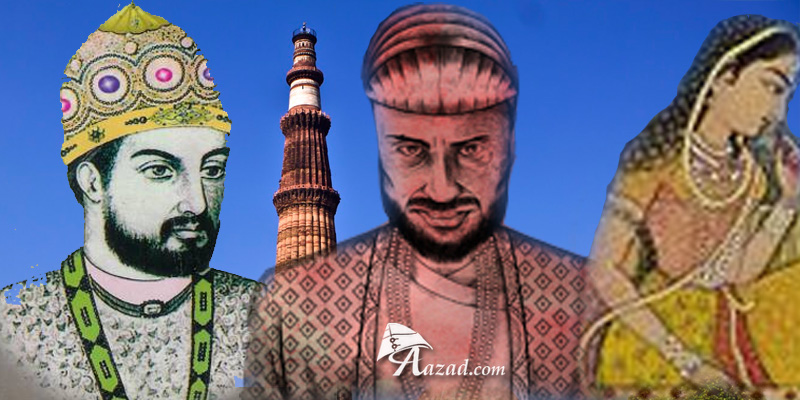 Alauddin Khilji was a Turkic (Afghan) ruler who ascended the throne after killing his father in law Jalaluddin Khilji and became the second Sultan of the Delhi Sultanate. He ruled Delhi for nearly 20 years from 1296 to 1316.  It is said that he had also killed his uncle to ascend the throne.

Alauddin Khilji liked to call himself 'Alexander' and even issued coins that portrayed him as the second Alexander. He was a Tyrant, an oppressive ruler who levied heavy taxes on Hindus and even disallowed them to possess weapons. However, cultural and architectural activities flourished during his reign. Artists from Middle East and Central Asia thronged Delhi. Siri Fort in Delhi was built during his reign. It was built to defend Delhi from Mongol Attack. In fact, Alauddin was famous for his war strategies and defeating the Mongols may times. He defeated the Mongols in the battles of Jalandhar in 1298, the the battle of Kili in 1299 . Even the battle of Amroha in 1305 and the Battle of Ravi in 1306 saw the Mongols being decisively defeated by the Delhi Sultanate headed by Alauddin Khilji. Alauddin  had even conquered Ranathambor by defeating Prithviraj Chauhan's descendent Hamir Deva in 1301.

Rani Padmavati & The Battle of Chittor

Rani Padmawati was married to Maharana Ratan Singh of Chittor. When Alauddin attacked Chittor and killed Rattan Singh, Rani Padmawati committed Jauhar which means self-immolation when facing defeat at the hands of an enemy.  The act was Jauhar has been depicted wisely in Bollywood movie Bajirao Mastani, when the enemy is about to conquer Bundelkhand, the women prepare themselves for Jauhar or self-immolation but they don't proceed as Bajirao defeats their enemy.

Alauddin Khilji vs The Moghuls In Delhi

While Alauddin was battling at Chittor, the Moghuls found an opportunity and invaded Delhi, Allauddin had to leave Chittor & rush to Delhi to fight with the Moghul Army headed by Turgha Khan. The battle was fought at Siri in Delhi. Since Alauddin was in bad shape, the Moghuls won but for some reason they did not capture Delhi and retreated.

Some of Alauddin's other conquests include Gujarat, Malwa, Warangal, Madurai, Mewar and Jalore. In fact, Alauddin was the first Muslim Sultan to conquer Southern India.

Alauddin Khilji died in 1316 and a tomb dedicated to him exists at the back of Qutub complex Delhi India. It is said that his army chief Malik Kafur was responsible for his death. It is rumored that Alauddin Khilji had homosexual relationship with his army chief Malik Kafur. Kafur was an opportunist and an ambitious person who was very well aware of the fact that his effeminate features captivated Alauddin Khilji. Though little is known about the reason for Khilji's death, many believed that Malik Kafur was responsible for his death as immediately after Alauddin Khiljis death, Malik Kafur produced a Will of the late Alauddin and became a functioning ruler. He placed the 5 year old son of Alauddin 'Shihabuddin Umar' on the throne and blinded his elder sons Khizr Khan and Shadi Khan. Malik Kafur then imprisoned the wife of Alauddin 'Malika-e-Jahan' and ruled Delhi for 35 days. Kafur's rule was said the be one of the most oppressive in Delhi's history. However his oppression couldn't last for long as he was murdered by the bodyguards of late Sultan Alauddin.

Bollywood director Sanjay Leela Bhansali's next project will be Rani Padmawati. Let us see how the history is depicted in that movie.