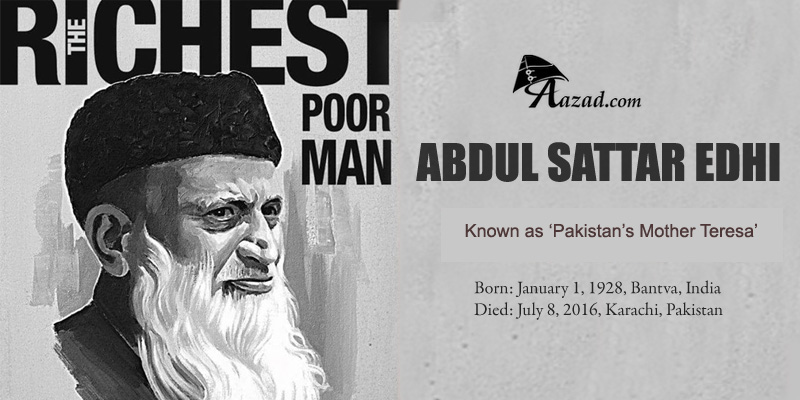 Abdul Sattar Edhi was a refugee from India. When Edi migrated to Pakistan, he didn't have anything. He was broke. His parents had advised him not to beg. His parents wanted him to become a philanthropist. He first started by asking for donations, standing by Quaid-e-Azam's (A title given to Pakistani founder Jinnah) Shrine and managed to collect Rs. 60,000. After treating people during the flu epidemic in Pakistan, he had some money left over.  With that money, he bought a second-hand ambulance and learned to drive it. It was a good investment, for he needed an ambulance to treat people in need. His dispensaries operated in poorest places where no one else could go, Lyari (in Karachi) being one of such places. Edhi's war was against poverty, prejudice & cruelty. He worked for the sake of humanity.

Abdul Sattar Edhi was to Karachi what Mother Teresa was to the city of Kolkata.  As the founder of the Edhi Foundation, the largest welfare organization in Pakistan, he had opened over 300 centers across the country, run by more than 3500 workers plus thousands of volunteers, providing medical aid, family planning and emergency assistance. The Edhi foundation has also made donations towards disaster relief around the world, including the victims of Hurricane Katrina in the United States. Edhi Foundation rely entirely on donations and avoid political or religious affiliation.

Edhi was one of the  most important public figures in Pakistan and recently there were reports that he was targeted by the Taliban. Taliban wanted to blackmail the government by abducting Edhi. Against his own wishes, he had round the clock police security. Edhi had even offered his service to the people of war torn Waziristan. Edhi called himself the poor man of god and hed was often termed as 'The Richest Poor Man' for the richness of his heart and his kindness that he bestowed upon the poor and needy.