Rejected by IIT and NIT in India, Srikanth Bolla is the founder and CEO of a 50 Crore Company - Hyderabad based Bollant Industries.
Jul 29, 2016, 9:39 am ISTIndiansAazad Staff 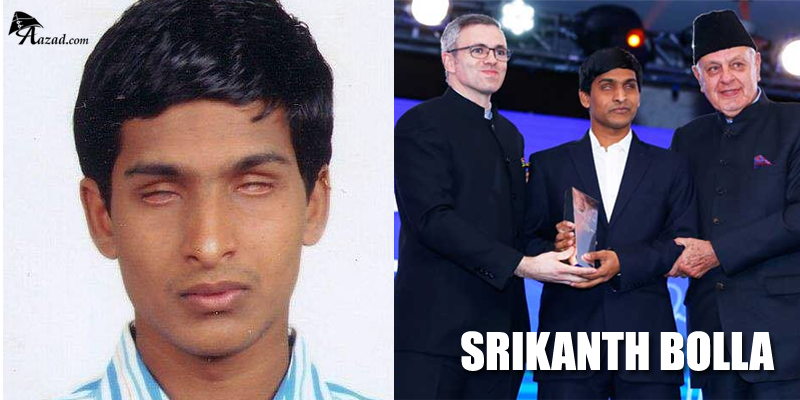 Born in Seetharamapuram in Andhra Pradesh, India, Srikanth Bolla is a visually impaired Indian entrepreneur. He was born in 1992 in a family that earned just Rs. 20,000 a year. When he was born, his parents were advised to get rid of him, but Srikanth somehow managed to survive.

Even after getting 90% in class 10th, he was refused admission in the Science stream for 12th; he sued the State Government, fought for 6 months, and won the case. He scored 98% with Science in 12th.

Bolla completed his pre-university exam from a college in Hyderabad, he wanted to get into IIT, but no coaching institute gave him admission. IITs and NITs didnt give him hall ticket for writing competitive exams. After being snubbed by India's leading IT Institutes, Srikanth applied overseas, and got selected in 4 of the best colleges ever created on Earth: MIT, Stanford, Berkeley and Carnegie Mellon. He chose Massachusetts Institute of Technology in the United States. He even received a scholarship at MIT and became the first International blind student to be admitted to the prestigious Massachusetts Institute of Technology (MIT) in the US.

After successfully completing his studies in the United States in 2012, Srikanth returned to India and launched Bollant Industries, where 60% of employees are poor, physically challenged. This 450 employees company is now worth Rs 50 crore. Today, Srikanth has four production plants, one each in Hubli (Karnataka) and Nizamabad (Telangana), and two in Hyderabad (Telangana). Another plant, which will be 100% solar operated, is coming up in Sri City, an integrated business city in Andhra Pradesh, 55 kms from Chennai.

As per him, “I was made blind by the perception of people.." When the world said to him that you can't do anything, Bolla said, "But I look up at the world and say I can do anything."