Popular December Festivals Across The Globe

Popular December Festivals Across The World

December accounts for the most number of festivals across the world. It is also the month when a major part of the world comes together to celebrate revelry, unique to their surroundings.
Dec 16, 2016, 9:28 am ISTFestivalsAazad Staff 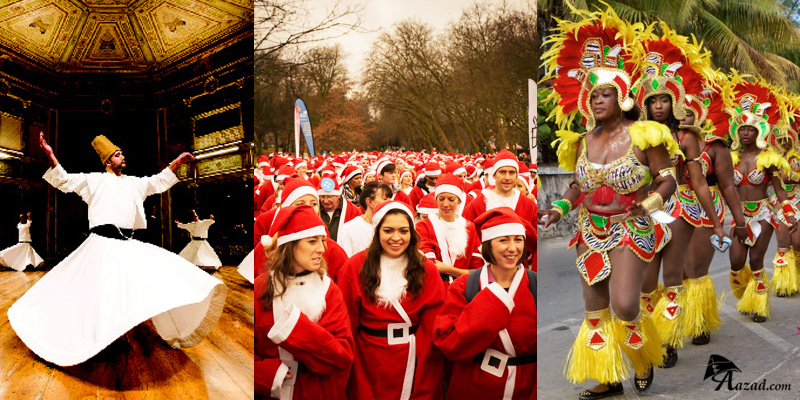 The world offers a wide range of fairs and festival to celebrate every month. These not only display the diverse culture and traditions that we are surrounded by, but also give us another reason to get the festive boots on.

Let's talk about the month in action – December!

December is known to be the month of Christmas and is said to be one of the most important periods of the Christian calendar. Different countries have their own special way of celebrating Christmas. From installing and lighting of Christmas trees, exchanging of Christmas cards and presents, midnight mass, hanging of Christmas stockings, candy canes, creation of nativity scenes depicting the birth of Jesus Christ, etc., –– a lot takes place across the world.
That said - not many are aware that this month of the year also accounts for the most number of festivals. It is also the month when a major part of the world comes together to celebrate revelry, unique to their surroundings. 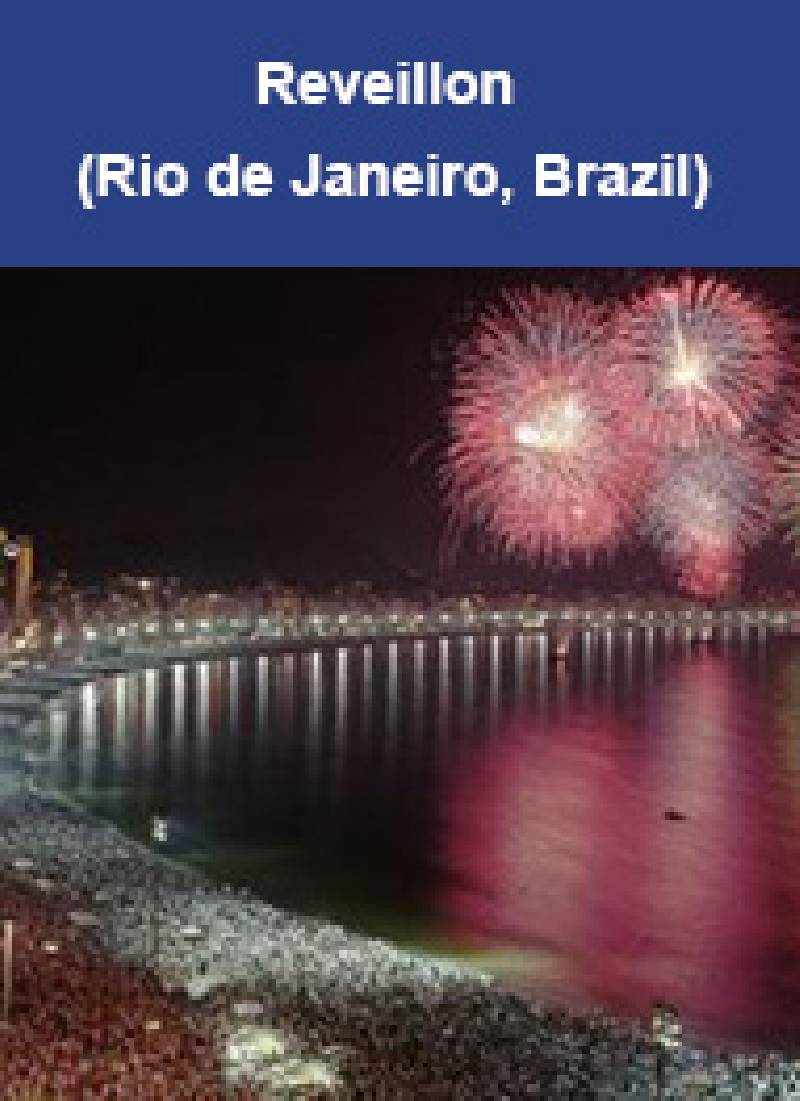 In Brazil, the New Year celebrations are known as Reveillon, and are held on beaches throughout the country. In fact, it is one of the biggest New Year’s Eve celebrations in the world. Around two million people all dressed up in white, with flower garlands around, get on the Copacabana beach to dance and party the night away. But there's more to this revelry than just dance and music. One can witness the magnificent view of floating candles set out in the honour of Iemanjá, the Goddess of Sea, the spectacular display of fireworks on the beach, and the great samba - all propelling the joy of life! People even write down their wishes for the coming year on small slips of paper and offer it to the goddess. This exciting mix of tradition and energetic celebrations, transform the festivities into a one‑in‑a‑life‑time experience. The partying lasts until dawn. And when the sun rises, it’s time for the first dip in the sea of the year. What a fabulous way to start the year! 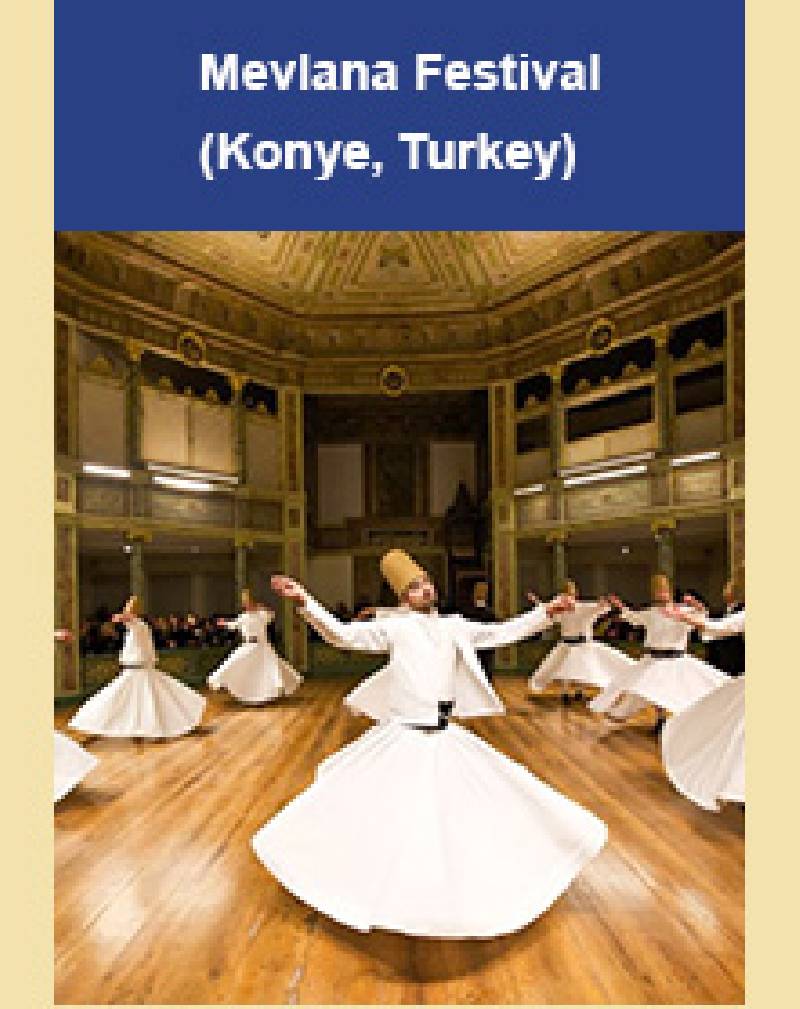 The Mevlana Festival is a ten day native religious gathering of Whirling Dervishes, that observes the death anniversary of the 13th century Sufi saint Mevlana (our guide) or Celaleddin Rumi. He was one of the world’s great mystic philosophers. Rumi preached love, tolerance, and forgiveness, and as a way of connecting with God would whirl in the city streets in joy. His poetry and religious writings are among the most beloved and respected. During the Mevlana Festival, people gather to watch the Whirling Dervishes dance and listen to poetry recitations. Mevlana has been described as one of the "most popular" and "biggest‑selling" poets in the USA, and Madonna is said to be a die-hard fan of the festival too. One can find the dervishes dance their famous whirl (spin) throughout the festival, but on the final night (17th December), they celebrate Mevlana’s "wedding night" with a truly special whirling dervishes dance. UNESCO has also added this ceremony to its list of Masterpieces of the Oral and Intangible Heritage of Humanity. 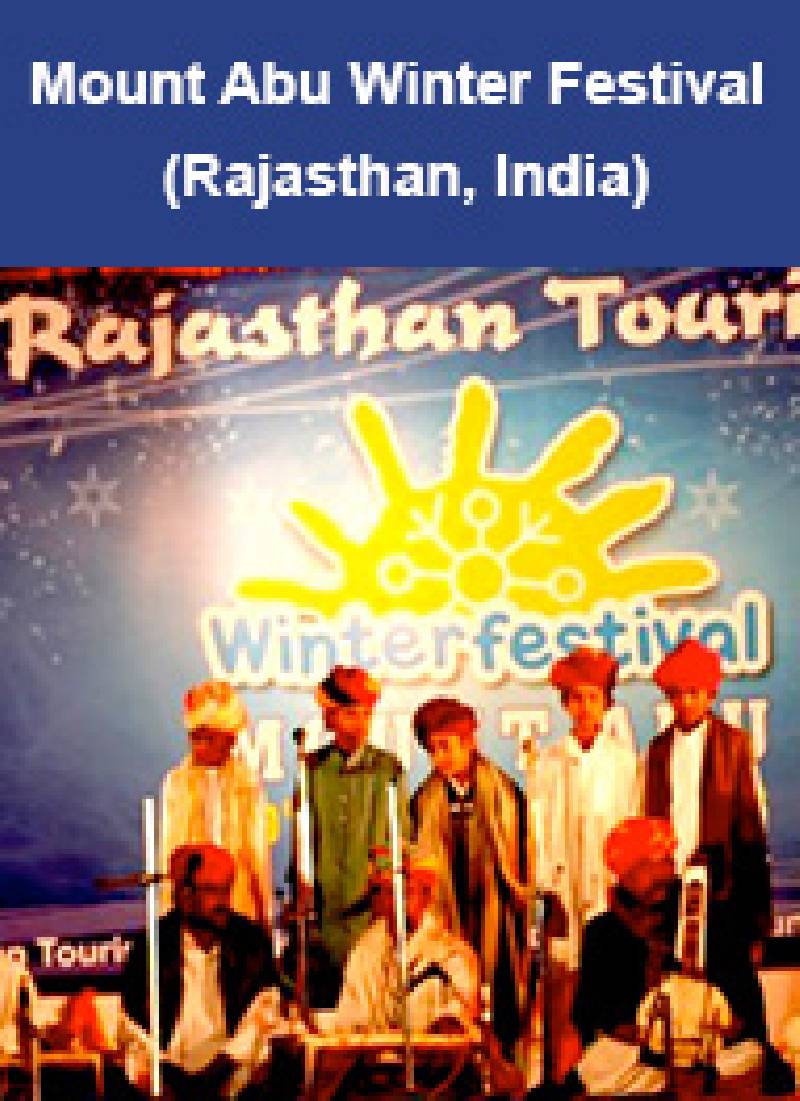 The famous Mount Abu winter festival happens during the last week of December. It is one of the most popular festivals in Rajasthan and takes place in the only hill station of Rajasthan - Mount Abu. It is a 3‑day long festival that celebrates the beauty, happiness and cheerfulness, the hospitable culture and tradition among the people of this picturesque hill station. The Winter Festival opens with a procession getting together to reach Nakki Lake, and then extends further to display the colors of other nearby places and states Gujarat, Punjab and Haryana. It features and displays the traditional dances, concerts, fairs, and fireworks. Participants include several folk artists from Rajasthan, Haryana, Punjab, Madhya Pradesh and Gujarat. Other attractions include – stage performances of Sufi, Kathak and folk dances like Ghoomar, Gair, Dhap and Kalbelia, and entertainments such as kite-flying, hot air ballooning, cricket, gilli danda, poetry reading and music performances. 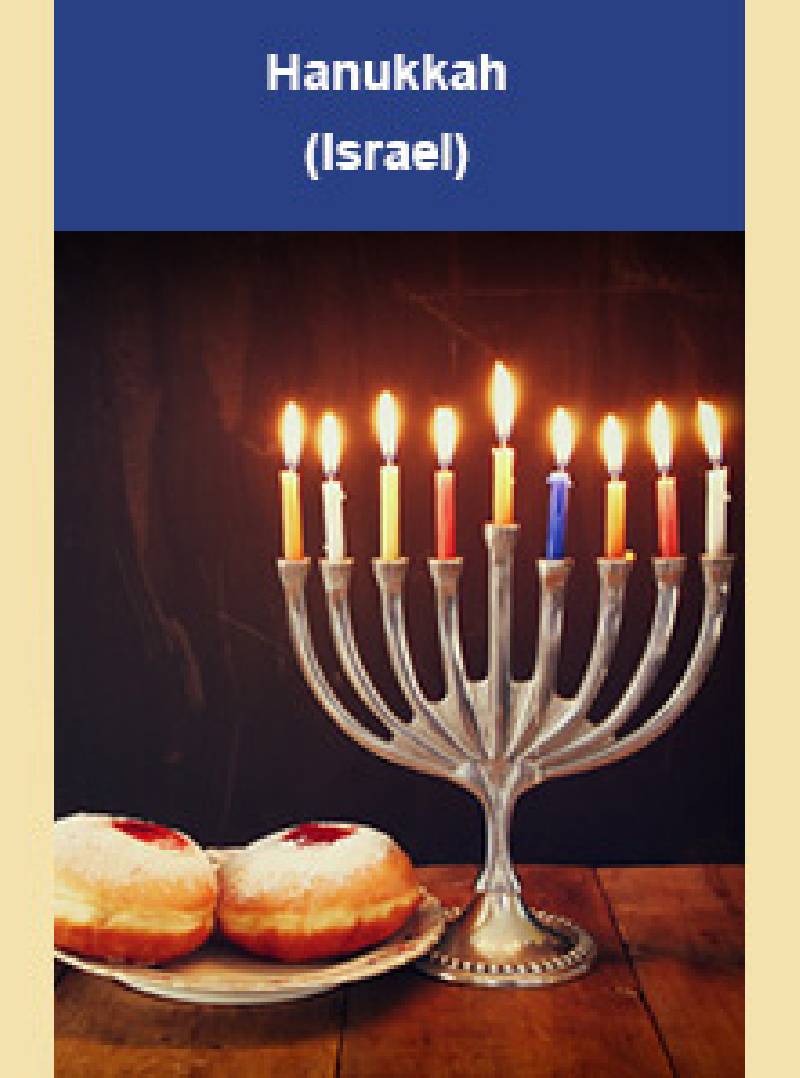 Hanukkah (or Chanukah), also known as the Festival of Lights, is an eight‑day Jewish holiday that celebrates the rededication of the Holy Temple (the Second Temple) in Jerusalem, where according to legend, Jews had risen up against their Greek‑Syrian oppressors in the 2nd century BC. The festival starts at any time between late November to late December, and is celebrated with the lighting of the unique candelabrum (the nine‑branched menorah), traditional foods, games and gifts. One additional light is lit on each night of the holiday, progressing to eight on the final night. It follows a series of rituals that are performed every day throughout the 8‑day holiday, some are family-based and others communal. There are special additions to the daily prayer service, and a section is added to the blessing after meals. It is also a time for giving and receiving presents and gifts are often given on each night. Lots of games are played during the time of Hanukkah. The most popular is 'dreidel' (Yiddish) or 'Sivivon' (Hebrew). Other Hanukkah festivities also include eating oil-based foods such as doughnuts and latkes. Santa Run is a festival in Newtown Wales where thousands of people get into red Santa suits and run a 7.2km course around the Powys town. It usually takes place around the last week of November or the first week in December. Although the route is fairly flat, but the fact that people run wearing a fur-trimmed, belted suits, makes it complicated and interesting. There are winners who have completed the race in about 19 minutes, while trying to earn a place in Guinness Book of Records. This idea was first conceived in 2001. The annual event is organized by Newtown and District Dial‑a‑Ride, a community charity providing transport for the elderly and people with disabilities. Every participant is charged £10 for registration and each one of them were required to raise £20 in sponsorship for a good cause. Half of the proceeds from the run go to Dial‑a‑Ride and the other half to a charity of each competing Santa's choice. Since its initiation, the charity festival has extended to many parts of the world too. The Giant Lantern Festival is an annual festival held in December, on the Saturday that precedes Christmas Eve in the fabulous city of San Fernando in the Philippines. The festival features a competition of giant lanterns, where every neighborhood of the city produces its own lantern design, which can be go up to five meters high. Today, the simple lantern that is made of paper glued over a bamboo frame with rice paste has evolved into spectacular shapes and kaleidoscopic splendour – but its message of light and hope remains the same. These lanterns are then paraded through the streets of the city to get everybody in the mood for Christmas, which is probably why the city is known as the “Christmas Capital of the Philippines". The parol of star lantern is perhaps the top Filipino Christmas symbol – colourful, crafted with love and shining with the spirit of the season. It was in the year 1931 that electricity was established in San Fernando, which sparked the birth of the first Giant Lantern Festival. The first lantern festival was held to honour President Manuel L. Quezon. 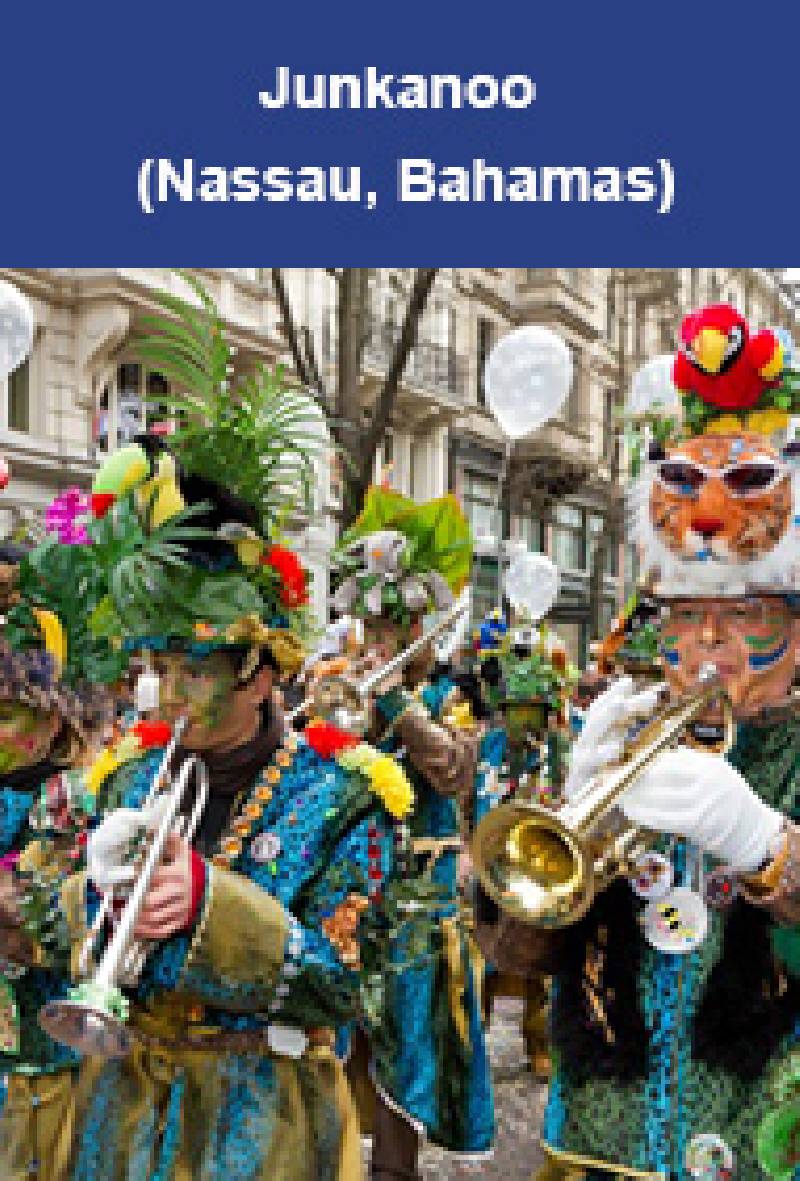 Junkanoo is a street parade with music, dance, and costumes of Igbo origin, that takes place in many towns across the Bahamas, on the 26th of December and 1st of January every year. In fact, one will also find similar Junkanoo parades in Miami in June and in Key West in October. The musicians seem to have perfected the hypnotic rhythms that they perform day and night wearing a cacophony of goatskin drums, cowbells, whistles and horns, and the imaginative costume designers work non‑stop to weave their own special magic with beautifully colored crepe paper and cardboard. The Junkanoo parade has featured in several movies and television shows including Thunderball (the James Bond film), Jaws The Revenge, and Top Chef, as well. The festival originated several centuries ago, when slaves on plantations in The Bahamas celebrated holidays granted around Christmas time. They would celebrate this holiday by dancing, music, and costumes. After liberation, the tradition continued and junkanoo evolved to what we see today. Burning Of The Devil (Antigue, Guatemala)

Burning Of The Devil (Antigua, Guatemala)

Burning of the devil, a.k.a. La Quema del Diablo, is a festival wherein the Guatemalans perform a ritual of cleansing just before the Christmas (7th Dec, 2016), with a day devoted to Burning the Devil! Their tradition has it that the devil creeps around under the beds, in the furniture and in the trash. So in attempts to get rid of devil, they clean their homes! All the useless unnecessary articles and trash is dumped out in piles on the street, and a big bonfire is lit, with an effigy of the devil himself to burn. It is believed that the devil and all evil spirits are eradicated by burning them down and with the black smoke and dust that fills the air. In cities throughout the country, the Devil is burned at the stroke of six. Other Latin American countries share similar traditions. 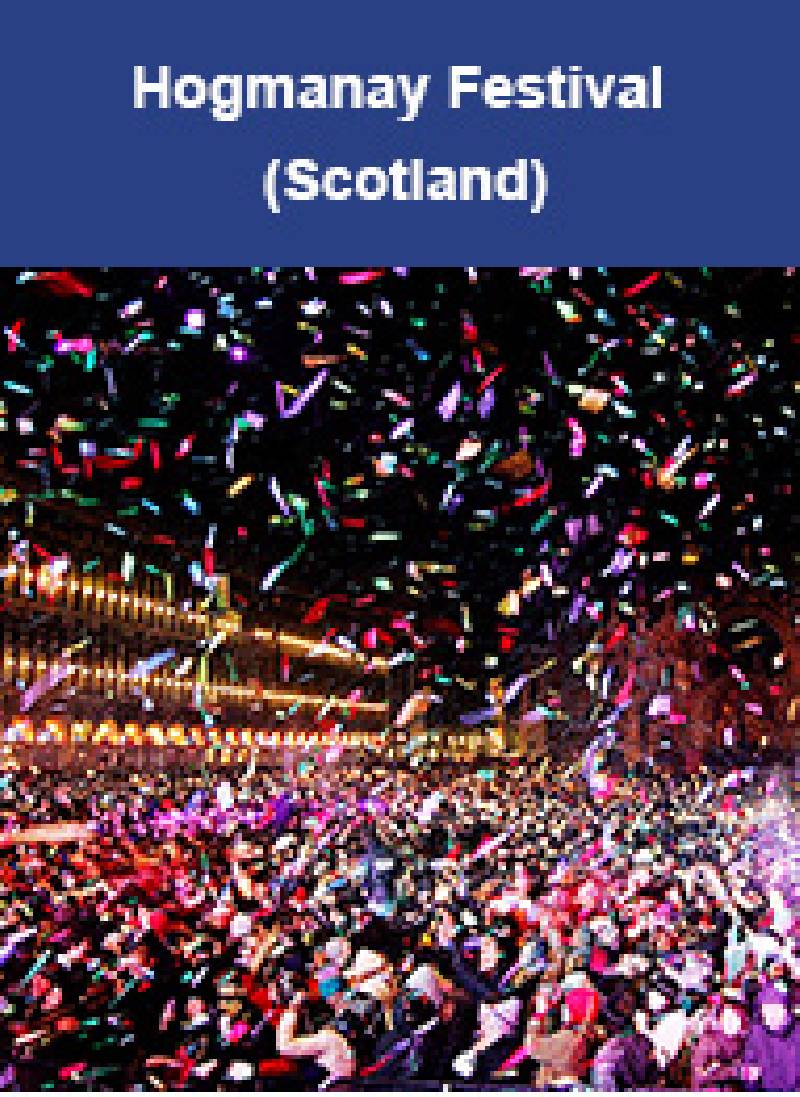 Hogmanay is the Scots word for the last day of the year and is often related with the celebration of the New Year. It is followed by further celebrations on the morning of New Year's Day. In fact, Hogmanay is a more popular festival in Edinburgh than Christmas. It is the biggest street party in all of Scotland, with people dancing and taking part in street parades, live concerts being performed by big ticket performers such as UB40 and Blondie. There are many customs, both national and local, associated with Hogmanay, and usually include giving gifts and visiting the homes of friends and neighbours, with special attention given to the first-foot, which starts immediately after midnight. First‑footing involves being the first person to cross the doorstep of a friend or neighbour and often involves the giving of symbolic gifts such as salt (less common today), coal, shortbread, black bun (a rich fruit cake) etc., with an intention to bring different kinds of luck.