A festival celebrated every year on the 13th night/14th day in the Krishna Paksha (waning moon) of the month of Maagha. Read more...
Feb 23, 2017, 7:07 pm ISTFestivalsAazad Staff 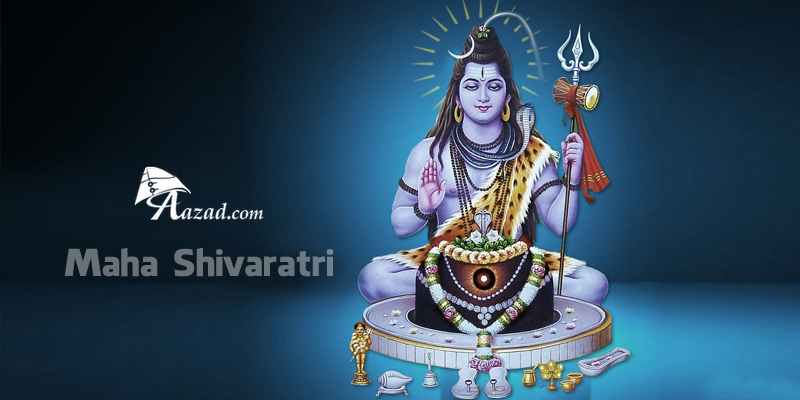 Maha Shivratri or Maha Sivaratri or Shivaratri or Sivaratri (Night of Shiva or "Great Night of Shiva") is a festival celebrated every year on the 13th night/14th day in the Krishna Paksha (waning moon) of the month of Maagha (as per Shalivahana or Gujrarati Vikrama) or Phalguna (as per Vikrama) in the Hindu Calendar (that is, the night before and day of the new moom).

While worshiping Lord Shiva in the morning, people offer milk, water and various other items including Dhatura, Bilva leves and fruits.The festival is principally celebrated by offerings of Bael (Bilva) leaves to the Lord Shiva, all day fasting and an all night long vigil. Devotees observe an all night vigil while chanting the mantra, "Om Namah Shivaya" and singing devotional hymns and songs.Cannabis is traditionally used as an offering for Lord Shiva and his followers. Per scriptural and discipleship traditions, the penances are performed in order to gain boons in the practice of Yoga and meditation, in order to reach the goal more swiftly and avoid rebirth.

The major   Jyotirlinga Shiva temples of India, such as in Varanasi and Somnatha, are particularly frequented on Maha Shivaratri. They serve also as sites for fairs and special events.The Mahakaleshwar Temple, Ujjain is one of the most venerated shrines consecrated to Shiva where a large congregation of devotees gathers to offer prayers on the day of Maha Shivaratri.

Babul Nath Temple of Mumbai Mahrastra is most popular Temple of Shiva Lord Shiva's stone lingam is worshipped, Place where almighty resides, gives an illusion of Mount Kailash. Shiva in the form of the Lord of the Babul tree is the main deity in this temple. The faithful climb up to the temple and obtain Darshan of the shivling and obtain blessings of the Lord. Lakhs of devotees  is visted temples on Mahashivratri festival.