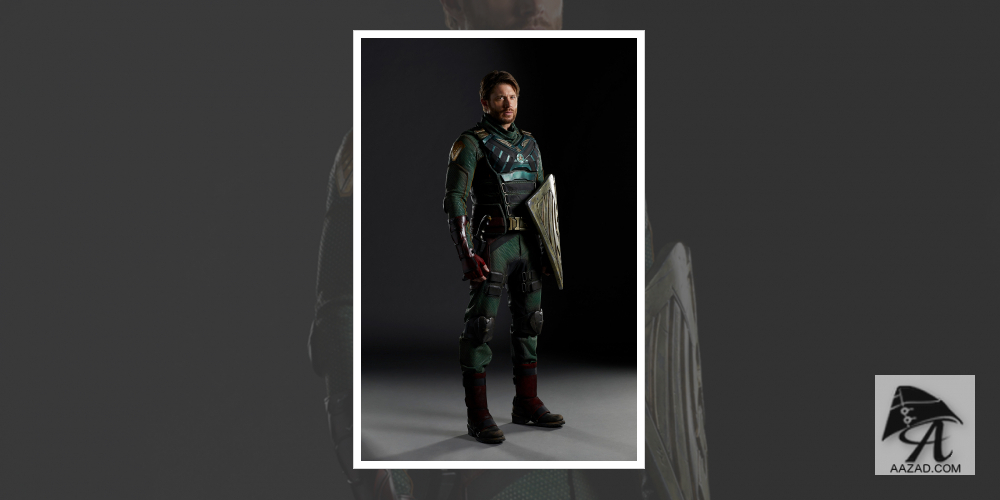 Amazon Prime Video released today the long awaited first-look of Jensen Ackles in the Soldier Boy supersuit for Season 3 of the hit series THE BOYS. The Super Suit was designed by Laura Jean Shannon and concept artist Greg Hopwood.

When designing the Soldier Boy Super Suit, Shannon noted, “Soldier Boy is the original bad ass. Our goal was to highlight a bygone era of overt masculinity and grit. With that pedigree we dove headfirst into baking in an all-American quality grounded in a military soldier’s practicality with a heavy dose of old school cowboy swagger. We knew that the actor had to have Steve McQueen looks and chops with a John Wayne attitude, luckily Jensen Ackles embodies all of that.”

Knowing that Soldier Boy is a fan-favorite character from the original graphic novels, Showrunner Eric Kripke knew the importance of the Super Suit, saying, “When I cast Jensen as Soldier Boy, the first thing I said was, ‘I’m most excited for you, because of the amazing process you’ll go through with LJ, our Super Suit designer.’  It took six months but the experience surpassed Jensen’s expectations.  LJ has made a work of art that tips its hat to the WWII Soldier Boy from the comics, while taking it in a sleek new direction.  And if you think the photos are cool, just wait till you see Jensen in action.  It’s one of my very favorite suits.  Also, now you can quit clogging my Twitter notifications with demands to see it.”

ABOUT JENSEN ACKLES:
Jensen Ackles currently stars as the lead on the CW¹s longest-running drama, "Supernatural", which is finishing its fifteenth season. Ackles plays Dean Winchester, the rugged bad boy who teams up with his younger brother to find their missing father and battle evil supernatural forces.

Ackles also starred in the 2009 remake of Patrick Lussier¹s 1981 slasher film, “My Bloody Valentine 3D” opposite Jaime King, where he played Tom, a principled man who returns to his home in Harmony, Missouri 10 years after 22 people were murdered on Valentine’s night. Additionally, he starred in David Winkler's “Devour" for Sony Pictures and David Mackay's independent romantic comedy, "Ten Inch Hero".

His previous television roles include playing Jason Teague on the WB’s "Smallville," Alec/X5-494 on Fox's "Dark Angel" and C.J. on the WB’s "Dawson¹s Creek”.  Additionally, he starred in the mini- series, “Blonde”, opposite Patrick Dempsey and Poppy Montgomery.

Ackles began his acting career in 1997 as the critically acclaimed 'Eric Roman Brady' on "Days of our Lives" for which he received three Daytime Emmy nominations and won the Soap Opera Digest Award for Best Male Newcomer in 1998.

Along with his wife, Danneel, Jensen is active in raising awareness and funds for various social interests. They partnered with and are on the board of a charity founded by Jensen’s Supernatural co-star, Misha Collins, called RandomActs — an organization aiming to change the world by spreading positivity in communities everywhere.  The Ackles’ have recently partnered with Random Acts to create a new initiative to revolutionize high school education in 2020 by bringing laptops into the villages of Nicaragua in the era of Covid-19 and the need for virtual instruction. The Ackles’ are also strong supporters of Creative Action, a nonprofit, arts-based youth development organization that provides creative learning programs for Central Texas youth. They also support OutYouth, an organization providing a safe space for all sexual orientations and gender identities and The Birthday Party Project, and organization that throws birthday parties for children in homeless shelters.  Lastly, the Ackles’ fund a donor-advised fund that directs funding to other charity organizations based on interest and need.