Bhaskaracharya was a Teacher, a Mathematician and also an Astronomer. He was born in Sahyadri the beutiful Maharastra terrains. He also headed the astronomical observatory in Uajjain that was the learning centre of India.
Sep 14, 2009, 11:44 am ISTIndiansSarita Pant 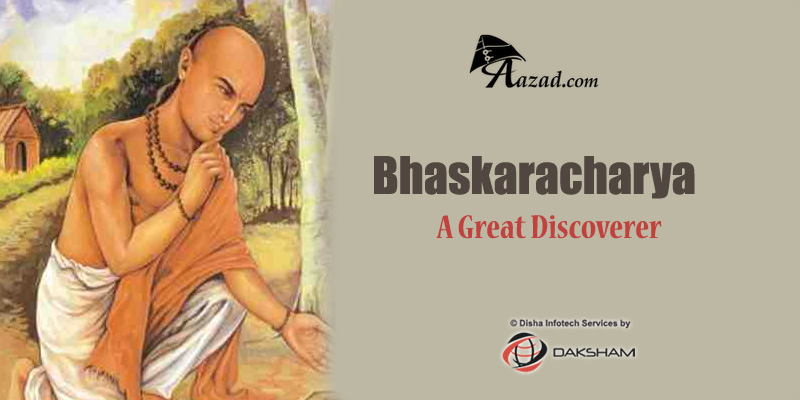 Bhaskaracharya was a born genius and an authority in mathematics, especially in algebra and geometry.

His astronomical findings on planetary positions, Occurrences of eclipses and Cosmography written in his treatise titled "Siddhanta Shiromani" [Siddhant Meaning Principle] stun every one. Siddhanta Shirmoani was divided into four parts;

"Lilavati" is divided into 13 chapters it covers branches of Mathematics, Arithmetic, Algebra, geometry, and a part of Trigonometry and Mensuration.

His work includes
Properties of ZERO '0' the division and operation rules of '0'
The estimation of 'PIE' (22/7;)
His Work on Negative Numbers including Surd's
Arithmetical Terms
Inverse Rule of 'THREE' and of 5, 7, 9, 11

In his book "Surya Siddhant" he wrote on the gravitational force, that helps
to keep the planets, the Sun and the moon in their respective orbits much before the world could even waken and realise to these findings.

"Kuttaka" the Quadratic Indeterminate equations was given by him in 12th Century well before the European mathematicians got it in the 17th Century.

Brahmagupta in the 7th Century, developed an "Astronomical Model" using which Bhaskara was able to define "Astronomical Quantities". He accurately calculated the time that earth took to revolve around the SUN as 365.2588 days that is a difference of 3.5Minutes of modern acceptance of 365.2563 days.

This was much before Leibniz or Newton would come up with Differential or Integral Calculus and to explain the forces of Gravity. He was first to conceive the differential coefficient and differential calculus

Bhaskaracharya was a Teacher, a Mathematician and also an Astronomer. He was born in Sahyadri the beutiful Maharastra terrains. He also headed the astronomical observatory in Uajjain that was the learning centre of India.

His contributions to Astronomy and Mathematics in the 12th Century was very significant as mentioned above.

for more detail of BHASKARACHARYA